Dead Writer, "Extinct" Form, The Power of the Small 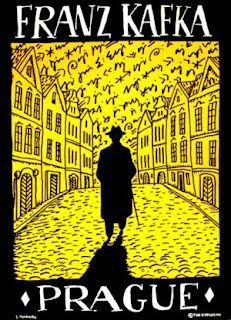 In the latest issue of The Nation, Alexander Provan observes:

To write aphorisms is to partake of "a minor art of the intellectual asthma," Austrian author Thomas Bernhard once wrote, "from which certain people, above all in France, have lived and still live, so-called half philosophers for nurses' night tables...whose sayings eventually find their way onto the walls of every dentist's waiting room." The most common complaint among revisionist biographers and doting critics of Franz Kafka is that, in the eighty-odd years since his death, the deification of the writer has reduced his work to the level of the aphorism. If Kafka has not yet found his way onto the walls of every dentist's waiting room, the photograph of his stony countenance and doleful eyes, so frequently invoked as a stand-in for his vision of the world, sometimes seems to be everywhere else. . . . http://www.thenation.com/doc/20090302/provan

One's acceptance of Provan's opinion of the state of Kafka's reputation is made to depend on one's acceptance of Bernhard's judgment of the aphorism, which he regards as worthy only for cross-stitch. While anything that has ossified into cliche is worthy of suspicion, I see no reason to vilify either the aphorism as such or samplers as such. Friends of mind used to have a sampler depicting cute mice and cats dancing around a slogan from Chairman Mao: "Reactionaries must be punished." Regardless how one may feel about Mao on the one hand or dancing mice on the other, the juxtaposition was bracing.

The opinion of the Austrian writer Bernhart about the status of the aphorism seems to me positively American in character. Europe has a long tradition of aphorists; America as far as I know has produced practically none, and there is indeed something about the aphorism that strikes me as fundamentally non-American (I don't want to say "unAmerican"). Americans seem to have little use for a short form of assertion that carries such authority as it can muster on its own back like a snail carries its shell. Authority is a big deal for Americans; each of us wants his or her own portable authority, but does not want to accede to the snail shell of anyone else. For the reader of aphorisms, the form generally demands a willing suspension not of disbelief but of personal authority. Someone says something provocative, and if we are to pay any heed to it at all, we must grant them their right to assert in a mode that carries no citation, stands in no range of experiment, and is in that sense entirely free-floating. So, when E.M. Cioran says something like "Consciousness is much more than the thorn, it is the dagger in the flesh"--an utterance which, like so many others in Cioran's corpus, stands entirely alone--if we are to read him at all, we have to grant him, at least for a moment, the right to speak so: categorically, and aggressively, as this statement is in a very real sense an assault on my own sense of being.

Doubts about this sort of experience stand in the way, for American audiences and probably for others, of a full appreciation of the possibilities of the aphorism. Our tradition of radical individualism stands, rather hypocritically, in opposition to the nature of the aphorism's claim to, and its toying with, authority. We claim the right to our own authority, but let another claim a similar right, and there's trouble in River City.

I am convinced that there are historical situations, even American ones, that require the acid of the most incisive aphorism: moments when all uses of authority have become so mangled or so filthy with disuse that they need to be cauterized, stripped bare, or even obliterated. The potent aphorism is a revolution wrapped inside a sentence. It is highly portable, and extremely volatile, and yet its volatility is entirely mental. The aphorism is an excellent analog to, and perhaps the truest antidote for, the suicide bomb.

"A golden rule: to leave an incomplete image of oneself," Cioran writes. This is precisely the work of the aphorism: in its brevity and its focus, the aphorism seems to call into being an entire cosmos, one which is sharp and clear and clean, yet completely evanescent: as soon as it appears completely, it vanishes, leaving a black pinhole and concomitant event horizon in its wake.

Is the aphorist a "half-philosopher"? If that means a sort of dilettante, then the answer is no, not unless one is willing to allow the opposite proposition: that systematic philosophers are "half-aphorists." Nietzsche, one of the profoundest practitioners of the aphorism in our history, called his practice "philosophizing with a hammer." If one is not willing to allow the hammer into one's philosophical toolbox, then certainly, Nietzsche is a half-philosopher.

The novel, which seeks, as Conrad said, to capture the human animal whole, is a totalizing form; so is the treatise or major-length work of nonfiction. The essay and the short story work differently, totalizing less; the lyric poem even less; the aphorism least of all. The aphorist is a thinker who is allergic to systems, who is all method, and whose intention is anarchic. In that sense, it may be that the genius of Kafka--about whose work the spirit of the aphorism creates a distinct and indelible atmosphere--lies in his being the only author ever to write epic aphorisms; that label, to my mind, fits The Trial better than any other.
The aphorist is the nanotechnologist of literature. Reuters reports today that scientists are making breakthroughs in the area of nanoelectronics that make possible previously unheard-of and in many ways bizarre powers: "tiny transistors . . . a fraction of the size of those used on advanced silicon chips," and "a film material capable of storing data from 250 DVDs onto a surface the size of a coin." Soon, I thought when I read this, we will inscribe poems on quarks for storage in the 15th dimension. Moby Dick might fit inside a hydrogen molecule.

Kafka's work finds a natural place in the horizon of such thinking, as does that of Nietzsche, and of Cioran. If this constitutes "intellectual asthma," I can only say that most asthmatics are allergic to necessary, but microscopic things: pollens, dust, the nano-irritants of nature. And if the aphorism is a "minor art," so be it: some of the most powerful, disturbing, and anarchic of our musics are written in minor keys.