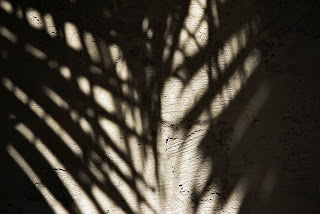 photo by T.R. Hummer
9/7/10
We dragged the bundled palm fronds, dusty and insubstantial, to the front of the house, for bulk garbage pickup. There was also a large, heavy old storm door, taller then I am by two feet and made of metal, that we had no use for. I took that out and put it on top of the fronds, as a sort of paperweight. Ten minutes later when I went back outside, the storm door was already gone, snagged by a junk scavenger. Travel light, Pilgrim. The heavy ones go first.
*
The emissary’s mission is complete, but he is not yet discharged. He awaits the pleasure of the Emperor, who has received the fatal ultimatum and made his reply, but has not yet dismissed the emissary. Without an assignment or any other purpose, the emissary sits in the courtyard; he watches the clouds blow past; he watches birds building a nest. He says farewell to them all, but he does not depart.
*
The attitude of farewell is reverent. It honors that which is passing, and is at the same time attentive to it. It is humble as long as it does not seek to name the hour of departing; it is a servant to the Mystery and a respectful fellow traveler of the rest. I am not a man of prayer; I am a man of farewells.
*
I say farewell to the oak that stood outside my bedroom window when I was a child; it blew down in a hurricane years ago, but remains within the aegis of my memory. I say farewell to the collie who attended me there: great heart, your bones are dust, but I carry you with me still, as you carried me then. I carry you still, but not forever: already you are smaller against the horizon of recollection, your bark less present, more redolent with echo. I say farewell to the cattle who were timeless against the landscape. Farewell to the shadow of the old farmhouse, farewell to the bees that stung me there, and the earthworms I grubbed for, and the fish I murdered, and the wind I squinted in, and the water.
*
I say farewell to my daughters; I will be with you for a long time yet by most reckonings, if we are lucky, but when I see you, when I speak with you, when I send you a note or sit with you in a chair, we are like trains traveling on parallel tracks at the same speed, but one is in advance of the others, so that its caboose is flanked by the engines of the other two. We speed together toward a common destination, but I want to get there first, to see whether what waits there is fit for you. I have no power to change anything about it, but at least I will know, or know that I cannot know.
*
The discipline of the emissary, once his ultimatum has been properly delivered, is to remain attentive in taking leave even though it takes forever for permission to be granted. This work is harder than threading through frozen passes and slipping behind enemy lines, evading snipers and land mines. He waits forgotten in the courtyard; dust gathers on his boots and pack; his beard grows to his waist, to his knees, and yet he must remain generous in his departure, he must regard whatever he meets—whether noblewoman, insect, or stone—with equal understanding. He is almost invisible in his unadorned hard chair. But the world passes through him, every moment, and is reconstituted in his vanishing.
*
I walk down the stone stairs to the library door; the ground is littered with pink petals from a flower which in my horizon of consciousness has no name; it grows on an old, well-tended vine in an arch above the walkway. I say farewell to the petals. Tomorrow, the next day, they will have said farewell to me. I walk down the concrete alley behind the church, where fat black super cans stand like dolmens, each crammed with refuse. They are stately in their being, and partake like standing stones in blood rituals beyond imagining. I say farewell to them. Their unconsciousness is ancient, and it feels to me vast and imperially neutral.
*
Heraclitus’s river flows past the grave of Heraclitus. It flows for miles beyond, through landscapes of orchards and vineyards, and then through wastelands, stones, and rapids, down to the Mediterranean, which is, as far as the river fish are concerned, a disastrous void, but to Heraclitus is the repository of all the rivers he dreamed of stepping into.
*
The cat who lives in the back yard killed a kangaroo mouse. S. went outside to pick up the decapitated corpse for last rites. When she hoisted it by the tail, all the mouse’s entrails spilled out onto the porch like candy from a sack.
*
The emissary dreams he is returning home, and meets himself on his way to deliver the necessary ultimatum. His other self does not recognize him, so intent is he on his mission, so weary with his journey, and so young. “What’s up ahead?” he asks this stranger. “Yourself,” the emissary replies. “Ah,” the younger man says. “Farewell then.” “Farewell.”
Posted by T.R. Hummer at 5:51 PM