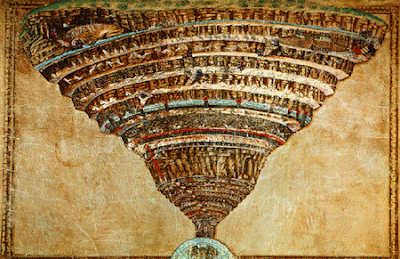 Botticelli
Inside the machine is another machine which refers to the machine enclosing it. So he touches her hand, and the image of a child emerges.
*
The steel ratchet in the wind: she felt it against her corneas, pressing precisely into the metric eye sockets, turning, tightening.
*
The elevator kept trembling: the mechanism out of key: but the riders held their eyes fixed on the dial, the reassuring arbitrary numbers.
*
Under the hood where gear meshes integer, in the hamster wheel of the heart, a singularity appears, an homunculus, a social security number.
*
Wreckage washed ashore, fragments of fuselage and cowling, seat-backs, oxygen masks, and hermit crabs remade themselves of metal and bone.
*
A rat in the dark attic at midnight, bolt-cutter teeth incising insulation. Black wire, red wire. A spark. The pianist's hands stop playing.
*
The train enters the tunnel, great piston breaches the oily cylinder, clockwork tide is driven to foam on the rocks, and the marriage is over.
Posted by T.R. Hummer at 7:10 PM 3 comments: 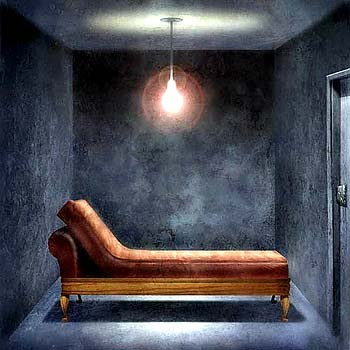 Matt Mahurin
At dinner, he sat silent, staring at his plate while the others chatted--a ringing in his ears, a gray aura around the chop, sulfurous mist.
*
The astronomer closed his dome at dawn. The morning star incised the horizon with a smell of lilies and a circle of blood on the eyepiece.
*
The old woman in the wheelchair watched raindrops inscribe the window. She read its poem to her blind friend, who mumbled protest: too fast.
*
She pauses on the bridge and looks down. Something about the way water moves, about light. But the child pulls her skirt, crying time, time.
*
They sat on the bridge rail drinking wine in starlight, watching for meteors to etch their glasscutter lineage into what passed for future.
*
Dying, by then, seemed normal to her, a breath and another breath and nothing, a stone dropped in water continuing in water to be a stone.
*
In pinewoods at midnight the trapped weasel gnawing its own leg stops to consider its bitter self-taste.
*
Horses in a meadow over strata of loess and limestone, reflections limned through the meniscus of earth by fossilized skeletons of dolphins.
*
That singular point on the continuum from which time reads like an inscribed transparency: just ahead, the hospital bed, the miraculous IV.
Posted by T.R. Hummer at 7:27 PM 2 comments: