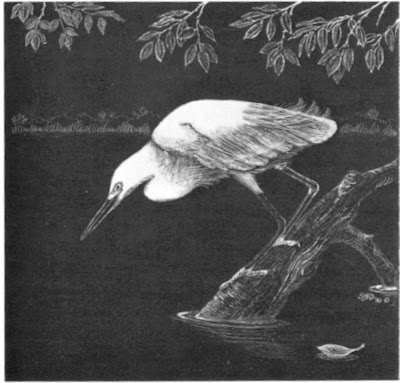 The place I spent my boyhood was landlocked; we were far from the ocean, and from any other kind of major body of water, whether significant lake or river. There were not even streams in that terrain: the water table was deep and did not break through the deep and fertile layers of soil laid down there millennia ago when our region was a shallow sea. Once those waters departed, there was nothing to replace them except what fell from the sky. The rich soil was not colonized by farmers until deep well technology made it possible to drill through thick layers of limestone to tap the aquifer there.

In the absence of natural standing water, our countryside was dotted with artificial ponds; these had started as watering places for livestock and fulfilled that function, but the landscape rapidly adopted them as part of the ecology. Unlike in drier and less arable regions, our little lakes did not sit uneasily or anomalously where they were constructed; they did not look like constructs at all, but quickly settled in and became necessary not only for cattle but also for a large array of flora and fauna that arrived with amazing speed from sources that were not immediately apparent. They were appropriated and integrated in such a way that one could hardly imagine the area without them. From the air, one could see that they speckled the landscape like scattered flecks of mica.A quarter mile from our house, on the other side of a gradual upward slope (at the top of which my father had built his barn), there was one such pond. About five acres in extent, it was of medium size by the standards of that place, and well located, with an enormous oak tree just behind the dam providing both stability and, at the right time of day, shade. That was clearly by design, as the oak was older than the pond. Other, smaller trees—willows, mostly—had sprung up in the meanwhile, but not so many as to make any area impassable or inaccessible. The water was deepest by the dam; on the other side, there were extensive shallows where our cattle came to wade out, cool themselves, and drink. This they did on a very regular schedule, in the early morning and near sunset. They were often accompanied by their bird familiars, cattle egrets, which during the summer followed the herd continually, eating insects flushed out of the grass by the movements of the cattle; sometimes they rode on cows’ backs, picking bugs off the coats of the black angus my father favored and bred.
Other times of day the pond was less obviously populated, though always populous nonetheless. During a certain period of my life—when I was between nine and fifteen years old, more or less—I spent huge hunks of my summers at the pond. One didn’t swim there: the water was clear enough, but the pond produced huge crops of algae and other water plants, the bottom was the very sticky mud our Black Prairie soil became when wet, and there were certainly snakes, water moccasins in particular, to worry about. There were also enormous snapping turtles.

Ostensibly I went there to fish. I took my spinning rod and tackle box of artificial lures; I also took a short-handled net, which I had modified into a long-handled one. This I used not for fish but to catch baby turtles in the pond’s shallows, where they went to sun. I spent more time catching turtles than fishing, in fact. Fishing interested me vaguely, and I did catch a good many large-mouth bass, small-mouth trout, and bream from that pond over the years. Mostly, though, it was the pond itself that attracted me; as I collected its inhabitants, insofar as I did collect them, the pond collected me.

At this point, we might segue into recollections of a certain kind of bucolic childhood—boyhood in particular, as in that place and time the fishing rod was one of the archetypes of rural boyhood. Most of the time I left that item in the shade of the oak tree. I was after something larger even than the ten-pound bass my father had once pulled out of that water.The movements of the surface of the water were for me a source of endless fascination. There was no room in that pond for large-scale turbulence. Had I grown up near an ocean, I would have absorbed a completely different dynamic. The surface of the pond was subtle. It was responsive to even the slightest movement of the air; but when the day was still, as it often enough was at noon in July, the water assumed a near-perfect pellucidity. There were rhythms of clarity and opacity, of reflection and refraction—of, you might say, opening and closing—that I never tired of observing. Those rhythms obeyed laws, obviously, but they were nevertheless thoroughly unpredictable, syncopated in ways that I understood deep in my body, but which defeated my mind’s ability to comprehend. Along the fixed margin of the dam, there was one kind of clarity; along the mutable ragged edge of the shallows there was another. I could glimpse the life beneath the water: turtle, crawfish, bream, snake; I could also witness the life of the sky, both through reflections and through the visitation of the sky’s representatives, particularly the tall herons I often surprised (as they surprised me) wading the shallows, hunting. Simultaneously a mirror and a lens, the water revealed its own world, and the world outside itself. It was infinitely various, but its scale was, for me, manageable. I fit there; I belonged.I am convinced that every poet carries within him or herself a cluster of process models which govern the nature and rhythm of how poems are created and why. In myself, I can recognize three. One comes from the life of the farm where I spent my childhood: in that model, one prepares the soil, one scatters the seed, and then one waits, dependent on the vagaries of the weather to make things happen. The second is musical (and obvious): the improvisatory lessons learned from years of delving into performance within the flexible but endlessly instructive parameters of the cluster of American musical forms that have been a lifelong passion for me. The third model—and I have only recently recognized its much more subtle operation in my psyche and in my poetic practice—comes from the life of that small pond: its fixed margin, its flexible ragged right, its simultaneous revelation of a life within and a life without, its subtle alteration of the spectrum of the clear and the opaque, reflection and refraction, opening and closing.Once I caught a smallish bream. I ran my stringer through its gill and tossed it back into the water, tethering it to the bank. Then I lost it: half forgot about it, and couldn’t locate where I’d affixed it to the ground. Distracted by my own meditations, I left it there. Six months later, in the height of winter, I found it again. It had died, of course, and so had the big snake that had swallowed it. When I pulled my stringer in from the water, I found the two skeletons attached, one inside the other, an elaborate sculpture, perfectly familiar and yet completely strange, a natural supernaturalism, or, as Stevens called it, the motive for metaphor,