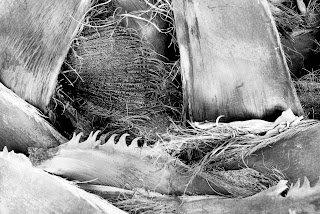 photo by T.R. Hummer
9/9/10
The emissary is breakfasting. A rasher of bacon and a boiled egg have been brought to him on nickel plates, along with a mug of steaming tea. He eats contemplatively, the food vanishing in a slow, steady rhythm. Thus he pays homage to the food he eats. It is a sign from the Emperor that he has not been entirely forgotten. Over his head hangs a painting of the Emperor. The Emperor and the emissary have the same face. So does the woman who walks by with a jug of water balanced on her head; so does the man who comes at last to clear away the dishes.
*
I listen to music: Lester Young and Billie Holliday. The music vanishes as soon as it enters me. I do not consume it, nor do I memorize it, though I can replay it in my mind’s ear perfectly. It cuts a vector through the center of my being. I can listen to it again at any time—and yet it vanishes. A lover of Lester Young’s tells how, at home, the great saxophonist would play just for her, “something pretty,” as he put it, and how then “I would tell him how important he was, and what a force he was in the world, it would never be forgotten, because I don’t believe anything’s ever lost. . . . I would tell him, ‘Your sound will be going round and round and round the world . . . for an eternity.’” Listening to the recorded music, I say farewell to it, and to the music Lester Young never recorded, the music he played for his lover’s ears alone. It goes round and round and round the world: the music, and the farewell that pursues it hopelessly.
*
Always the ancient danger of simply falling asleep in the middle of one’s life—falling asleep and never waking up: dreaming or not dreaming, but not living one’s own reality. That danger, accompanied by the suspicion that this is precisely what one is supposed to do.
*
Today the palm fronds—still in their bundles, the bundles in their piles—are obviously more desiccated, more attenuated, less present than yesterday. The desert sun burns the essences out of things. Even my limited powers of perception now can see that something is being leached away—water, yes, of course, but more than that: whatever the binding force of Form is. Their substance disappears but so does their structure. They have not moved but their journey is continuous, and multi-dimensional.
*
I stood beside my father’s bed while he was dying. Was I observing? Was I helping? I was not helping him die, nor was I helping him live. I was helping him get through a span of time. Did my presence comfort him? Was he even aware that I was there? For hours I sat near his head, giving him ice chips, which he seemed to want, and adjusting the oxygen mask. The moment of his dying was impossible to know. He stopped his stridorous breathing, started again, stopped again. Then in the silence that followed, I knew he was not yet dead, not yet, not yet. A moment came when, yes, he was. Impossible to know just when. Impossible to prove, but I suspect time is not at all what we experience it as being. A physicist might disagree, but the concept of Time’s Arrow makes me bristle with uncertainty. Why should we say my father was following an arrow’s course? Isn’t it equally likely that he found an alleyway to vanish down, and made a sharp right turn?
*
The world is the sum of its manifold resistances and our evanescent egos nothing more than the heat given off by its friction.
*
Farewell is an ethos. It demands patience and courtesy. To complain about the place one is leaving, or to despair of it, is simple rudeness, once one understands that one’s stay has a duration. It is not my place; I am a guest in it. A good guest knows how to behave even in the presence of a bad host. And a good guest knows when to leave.
*
I saw my father turn: turn away, turn to a corpse, turn to dust. He turned the corner at the end of the last street in the neighborhood of unconcealment. He ceased to linger. And he knew it was time to go. The doctors said he had six months; he lived four days. He said: “I’m ready to die, I just don’t know how to do it.” His last words were "I want to be a corpse." He had to find a door, like a man in a dark room groping for a handle. And he found it. Is like is the grammatical axis of simile; is is the grammatical axis both of metaphor and of Being. Metaphor is a trope; a trope is a turning. Consider the heliotrope. Consider my father, dying.
*
God stood looking at the Earth from his infinite-windowed mansion. He caught sight of the emissary sitting erect in the Emperor’s garden, waiting. “This emissary,” he said to a nearby archangel, “what kind of man is he?” “Is he still a man?” replied the archangel. God pondered this question. “He looks like one,” God said. “He looks like you,” said the angel.
Posted by T.R. Hummer at 5:49 PM